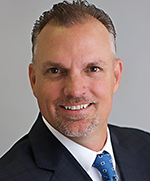 Terry is a native Midlander, graduating from Midland High School. Following a 28 year career in wholesale distribution selling plumbing and HVAC materials, Terry transitioned into the real estate profession becoming licensed in 2014. Terry and DeLaura acquired Legacy Real Estate Brokerage in 2015, leading Terry to assume the responsibility of General Manager. Along the way, Terry has earned the TRLP designation, serves on the Finance Committee for Permian Board of Realtor as well as and is a Director for the Permian Basin Board of Realtors.

Terry is married to DeLaura Gammage, a top producing REALTOR and together they have two married children and six granddaughters. When not enjoying time with family and friends or traveling with DeLaura, Terry might be found on the golf course receiving a dose of humility!

Finally, Terry firmly believes in and stands behind the Legacy Mission Statement: "A leading real estate brokerage maintaining local ownership while providing exceptional services to our clients, agents and community"