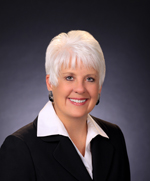 Martha Mims Manulik is a fourth generation Midlander who knows and understands the Permian Basin. Her grandfather started West Texas Abstract and was a member of the School Board, her father was a member of the Midland City Council and both parents & siblings have been active in the community through church and volunteer activities. Martha has followed in their footsteps serving in many volunteer capacities including member and President of the Midland Independent School District.

Martha has been licensed since 1979. She took a break to stay home and raise her children but has been back, full-time, since 1994. Consistently a Top Producer, Martha has served as President of the Permian Basin Board of Realtors, been in the top 8% of Coldwell Banker Agents Nationwide during her tenure with Coldwell Banker and has earned extra designations including CRS, GRI and ABR which demonstrates her willingness and desire to go the extra mile to sharpen her skills at every opportunity.

In 2007, Martha was chosen as one of two to represent the Permian Basin Board of Realtors at the Leadership training class, a class designed by the Texas Association of Realtors to promote leadership at the local, state and national level. In the same year, she was also voted a winner in Midland's Top 100 for BEST REALTOR.

Martha's humor, knowledge and extra training are what she uses to help insure that your real estate transaction, while being handled expertly, can also be fun.